Reading in the Dark

The region-wide blackout last night brought back so many childhood memories!  I was one of those kids who complied easily at bedtime because I always had my pink Ever-Ready flashlight stashed under my pillow. 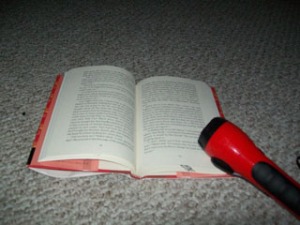 So I didn’t let the power outage interfere with my daughter’s storytime and it was actually so fun that I think we’ll have do this again every once in a while!

I have to admit, I’ve never read by candlelight.  A few years ago my mom gave me these clever, rechargeable tealights that are constantly repositioned around my house.  I just love them.  They give off a flickery, orange glow that’s quite similar to real fire—a nice alternative when you want to go all Smokey the Bear /Don’t Play with Matches on your kid.  (Of course my daughter has seen me dangle satin ribbons in candle flames when I’m crafting, so I’m probably confusing her with my mixed messages).

The tealights do not offer good reading light, but Halloween is coming and they create a perfectly creepy effect, don’t you think?

And I do have a booklight which my husband gave me in hopes I’d use it instead of my bedside lamp when I’m reading at night.  But I don’t really like it.

Now, does reading in dim light really hurt your eyes? According to this article, not necessarily, though eye strain–as most avid readers already know–is hardly desirable.

Wherever and whenever you’re reading, be kind to your eyes!

Comments Off on Reading in the Dark

Last week, my daughter told me about a troubling recess incident at her school:  apparently, a game of “Lego City Police” devolved into the playground version of police brutality.  Teachers were alerted and intervened but not before one of my daughter’s kindergarten classmates was punched and scratched by another kid.

In her responses to my “casual” questions, my daughter revealed that the boy who was punched/scratched is not well liked among his peers.  She says the other boys don’t like him because he doesn’t brush his teeth.  The only girl police officer in the game, my daughter backed away when the punching started and didn’t know what to do.  The boy who did the punching/scratching has often been sent to the principal’s office but my daughter thinks he is silly and says funny things in class.

Wow.  All this just in time for No Name Calling Week.

Some parents may feel it is an overreaction on my part to be concerned that the Lego City Police incident could be a precursor to bullying.  However, the statistics are alarming:  160,000 students per day skip school in fear of attack or bullying; out of 37 studied shootings, 66% of them were led by individuals who felt bullied; and 20% of high school students say they’ve considered suicide within the past twelve months, mentioning the triggers as bullying, teasing, and social rejection.  (These figures are borrowed from a library colleague; I didn’t ask for her sources).

The messages sent to my daughter and her classmates about this incident matter.  The time to address these issues is now, and the time to lay the foundation for the prevention of future bullying is now.

My way of addressing issues typically involves books and I am familiar with the skepticism toward my approach:  can books really change the world?  Can reading really change lives?

Jenny Betz, Education Manager for GLSEN, suggested a different spin on these questions yesterday in “Battle Bullying with Books,” a webinar sponsored by Booklist.  Betz says that perhaps not the books themselves but the conversations around those books are what truly have the power to change lives.

One of my favorite aspects of teaching is listening to young people talk about issues of importance to them.  With civil discourse eroding before our eyes and disturbingly venomous speech flying around, it feels increasingly important to teach youth how to engage in respectful conversation with others.  I think using literature to open up dialogue is a great place to start.

Alone, the act of reading will not teach a child how to recognize and understand his emotions, will not create empathy.    But coupled with discussion, reading can help foster sensitivity and healthy relationships.

The thing to remember with discussion is that being “right” isn’t the point.  It’s more important to understanding what the other person is saying.  We adults are so eager to impart wisdom to young people that sometimes we talk too much.  We want young people to listen to us, but we often fail to reciprocate and truly listen to them.

All It Takes is One

In the past decade, innumerable titles have been published that deal with the subject of bullying for kids of all ages.  Last year author Mitali Perkins compiled a list of great titles for young adults (ages 12+).  For emergent readers (ages 5-8) the recent Benny and Penny in the Toy Breaker by Geoffrey Hayes is a good one and the upcoming The Three Bully Goats by Leslie Kimmelman seems promising.  James Howe, author of Bunnicula, published The Misfits in 2001  for middle grade readers.  Loosely based on his daughter’s experience at the hands of middle school bullies, The Misfits is the book that launched No Name Calling Week.

My personal favorite is One by Kathryn Otoshi, published in 2008 by KO Kids Books.   This profound picture book is accessible for very young children but has an elegant, Zen flair that makes it appealing for tweens and teens as well.  Every preschool and elementary school library needs a copy of this book, and it would make a terrific teacher gift as well.  (Coincidentally, I had given my daughter’s teacher a copy of One earlier this month.  She read it to the class this week and the kids’ response to it was very encouraging.)

Summary:   Generally, Blue feels happy and life is good.  Except when Red gets mad and takes it out on Blue.  Those are the times when Blue feels, well, blue.  And Red sometimes makes Orange, Purple, Green, and Yellow feel blue too.  Red is a bully but the other colors don’t quite know what to do about it until One comes along and teaches an important lesson—that everyone counts!

Counting by ones may seem like a slow process—one book, one teacher, one kid, one parent—but we never know which one moment can be a turning point.  I, for one, don’t want to allow a single opportunity to slip by.

“Take a tip from the Cat / And hold onto your hat / ‘Cause this ain’t Mother Goose!” ~ from Seussical: The Musical

Though there are the well-loved cartoons as well as some great movies adapting Seuss books, nothing breathes life into Seuss the way Seussical: The Musical does.  Mrs. Audrey Geisel, Dr. Seuss’s widow, admits she “couldn’t tell where [Seuss] left off and [Seussical] began,” so well does the show illuminate the “fantastical nature” and “contemporary themes” of Seuss’s work (Aherns & Flaherty, “A Note from the Authors”).

For young Seuss fans, Seussical makes an excellent introduction to live theater.  I sifted through the many Seussicals on YouTube and compiled a sampling of the music and a glimpse of what’s possible when bringing Seuss to the stage.  My daughter loves to watch these videos:

The opening song, “Oh the Thinks You Can Think!” from a high school production that features good choreography and a great Cat.  A clip from the Broadway cast performing “Biggest Blame Fool” at the Macy’s Thanksgiving Day Parade–Kevin Chamberlin’s expressions are fantastic.  And an outstanding Gertrude performing the hilarious “One Feather Tail of Gertrude McFuzz.” As you can see, Seussical is pure fun!

I found information for a few current and upcoming productions of Seussical in Santa Barbara, CA, San Carlos, CA, Summit, NJ, and San Diego, CA.  If you know of other productions, please share details in a comment.

By the way, it may seem a stretch to find a discussion of a Broadway musical in a reading blog, even if the musical is based on the collected works of a renowned writer.  But if you’ve seen my Tevana menu post, you know I read all manner of material.  In this case it’s…wait for it…the liner notes from the soundtrack.  Click here for a link to lyrics from the show.

Little Lit Lover says:  I like how the Cat in the Hat pops up all over the place.  I can’t wait to see it on stage again!

I’ve complied a number of “Seuss-gestions” for celebrating Dr. Seuss’s birthday and Read Across America.  Click on the Lorax for my favorite of all the activities.

Learn:  Who was the man behind the books?  There are innumerable bios of Theodor Geisel, but for brevity and quality, this site is great and also contains information about the sculpture garden which serves as a national memorial to Seuss in the town of his birth.

Discover:  Geisel,  the artist.  Though Dr. Seuss is generally thought of as a writer and illustrator of children’s books, Geisel’s art offers something for all ages.  For those interested in art beyond the books, explore this site.  History buffs will enjoy this splendid catalog of political cartoons.

Plan:  As an alternative to Disney, wouldn’t it be fun to plan a family trip to Seuss Landing in Orlando?  (where the Harry Potter theme park will soon be open…but don’t let me get distracted.)

Read (of course!): Make time this week to read your favorite Dr. Seuss book  (and share your selection here).

Comments Off on Celebrate Seuss!